The Indiana All-Stars have been announced.  Dalton Scott is South Putnam’s 16th All-Star honoree.  Outside of the Mr. Football Award, this is the highest honor a high school football player can achieve.  Dalton joins a distinguished list of Eagles who have played in this game.

The 53rd Annual North/South Indiana All-Star Game will be played on Friday, July 12 at North Central High School in Indianapolis.  Kickoff is at 7 PM.  A link to the game info and rosters can be found here. 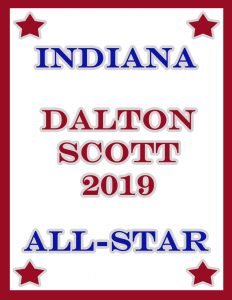 Franklin Invitational
11:00 am
View All Events